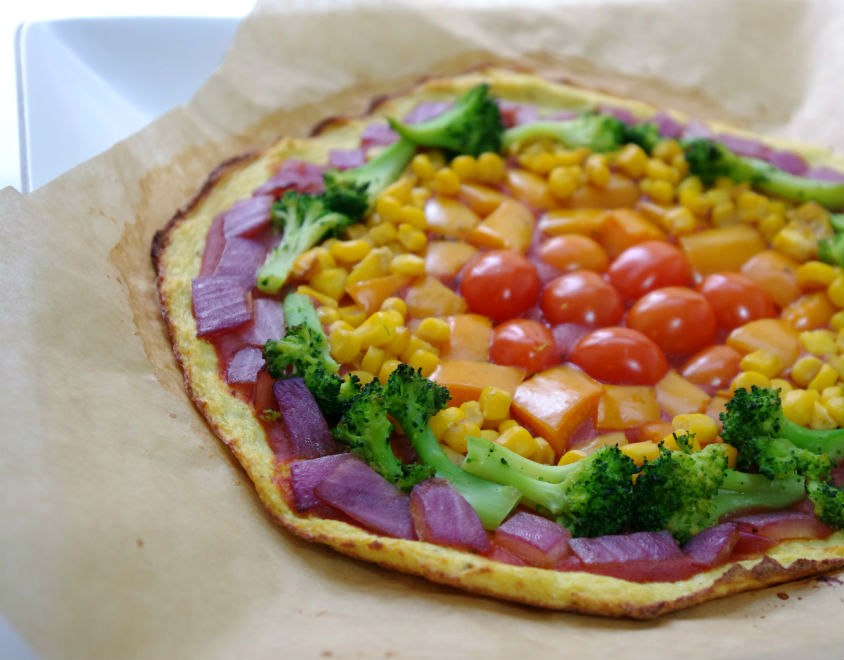 I’m currently soaking up the sweet spot of winter-to-spring transition. Cracking my window until my apartment is just crisp enough for my comforter and savoring my workday commute, which is neither frigid nor sweaty. These minute details are making me feel…completely blissed out.

A friend of mine recently said she felt she was hitting her stride in life; the little things no longer stressed her out and everything was falling into place. Part of me thinks I am feeling this way now, at the end of March, simply because of the promise of summer – ducking out early on Fridays for weekends away or spending a weeknight at a rooftop bar. Either way, I’m feeling quite stride-y myself, despite all of the unknowns in life and all of the craziness of working and studying. I’m feeling so good, in fact, that I gave cauliflower pizza crust another shot.

I made a cauli crust a few years ago for my parents, and I don’t remember it tasting so great. But the sheer number of Pinterest plugs can’t be lies – so I decided to give it another shot. I won’t sugarcoat this for you: it is very labor intensive (at least by my standards). That being said, it’s certainly minimalist and I promise you – IT IS DELICIOUS! Even without the rainbow ingredient arrangement (Type A anyone?), it’s worth a try.

*I’d usually insist you make this from scratch, but HELLO this recipe has a few too many steps so save yourself some time and take a shortcut.

Wash and trim your cauliflower then use a food processor or blender to make cauliflower rice/snow (just pulse until it looks like snow). 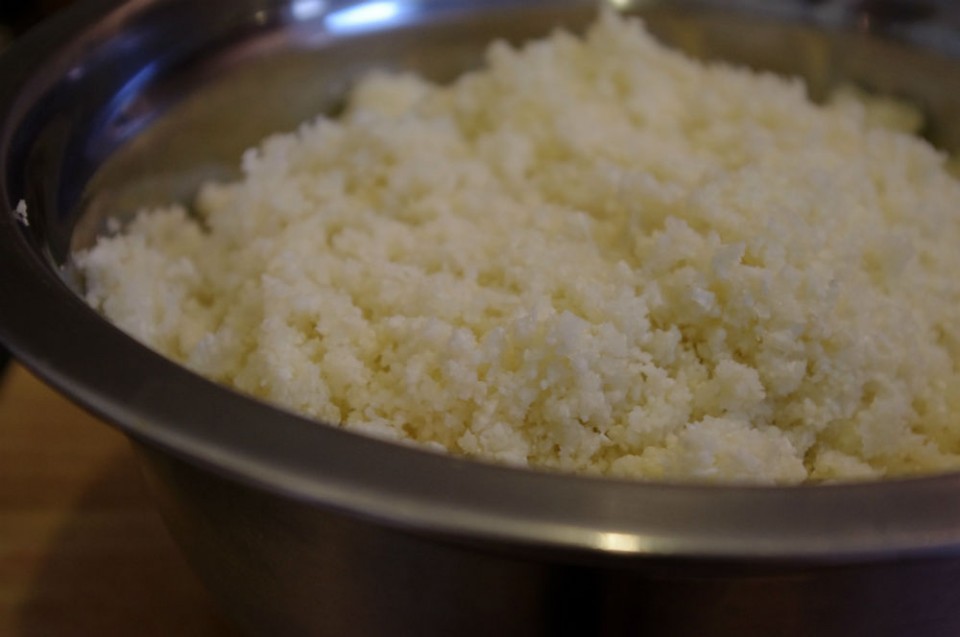 If you have a microwave, go ahead and steam the cauliflower. I used a pot with about a cup of water and simmered the rice with the lid on for roughly 5 minutes, then removed from heat to cool. Whether you use a microwave, on in-pot steamer or use my method, let your cauli rice fully cool. 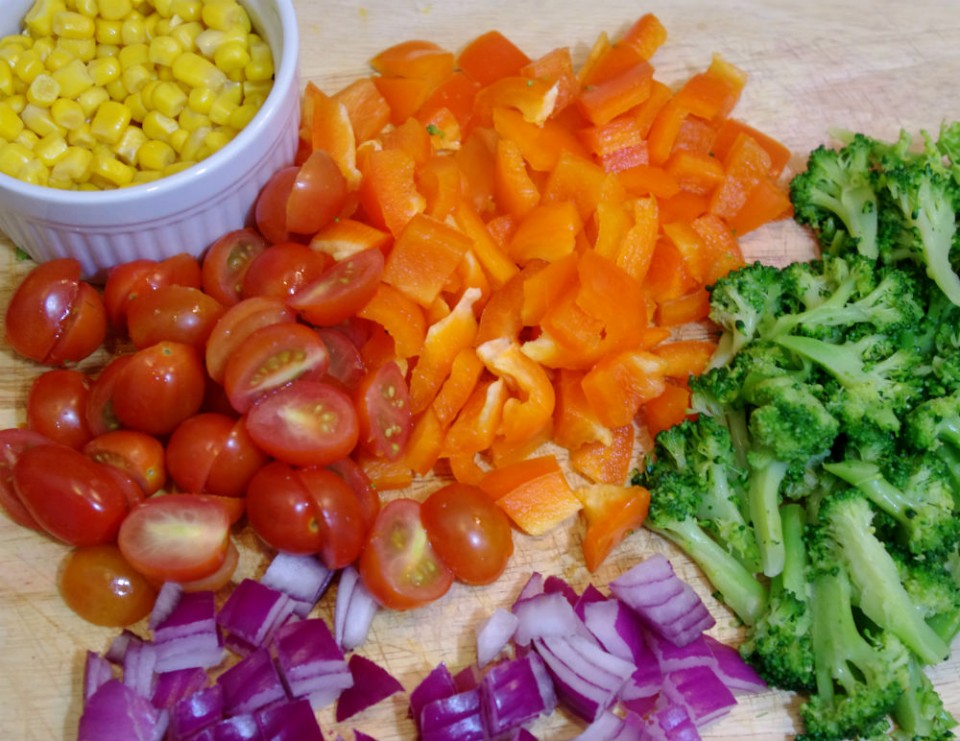 In the meantime, prep your veggies. You’ll want them almost fully cooked for your pizza toppings. I sauteed mine quickly in a pan – one by one – then placed them in bowls to cool. 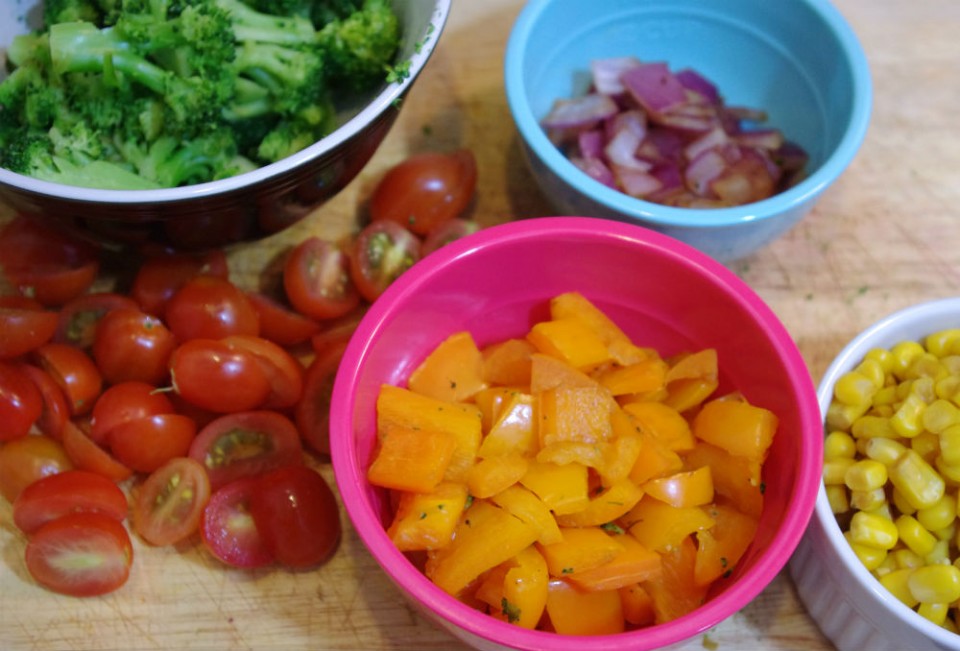 Pre-heat the oven to 375. When your cauliflower has cooled completely, drain as much as possible from the bowl or pot. Then, using a thin dishtowel, plop a bit of the rice in the middle, close the edges of the dish towel and wring out the liquid with both hands. You want to get rid of all of the moisture, so keep twisting until the dripping stops, then dump the cauliflower clumps into a medium mixing bowl. Continue doing this until all of the your cauliflower has been wrung out. 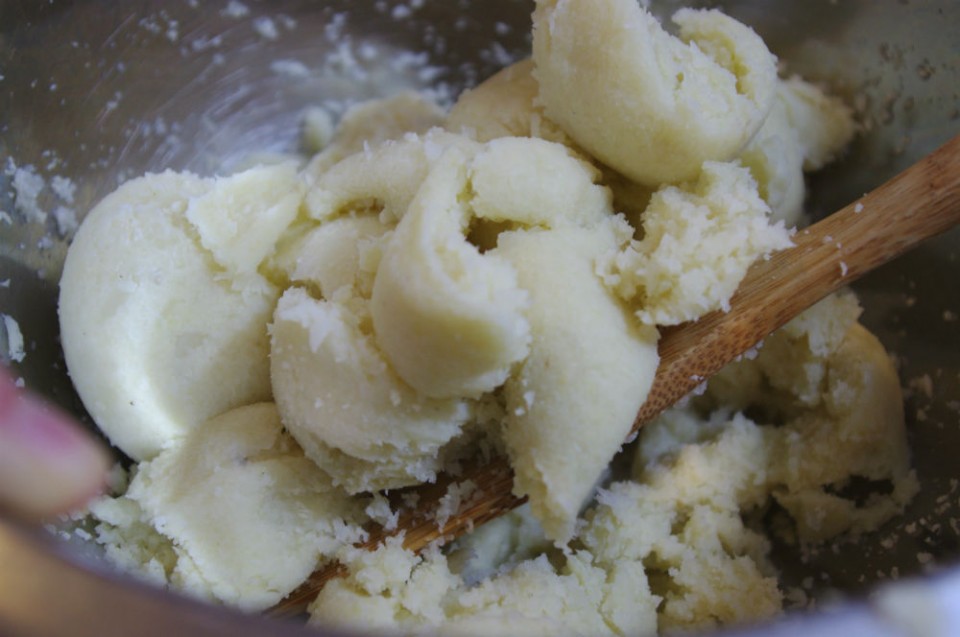 In a small bowl, crack all four eggs and whisk together. Then, add in the 1/4 cup of coconut flour and stir a bit until the chunks aren’t noticeable. Add this mixture into the bowl with the cauliflower, then add a bit of salt and pepper and stir everything thoroughly. 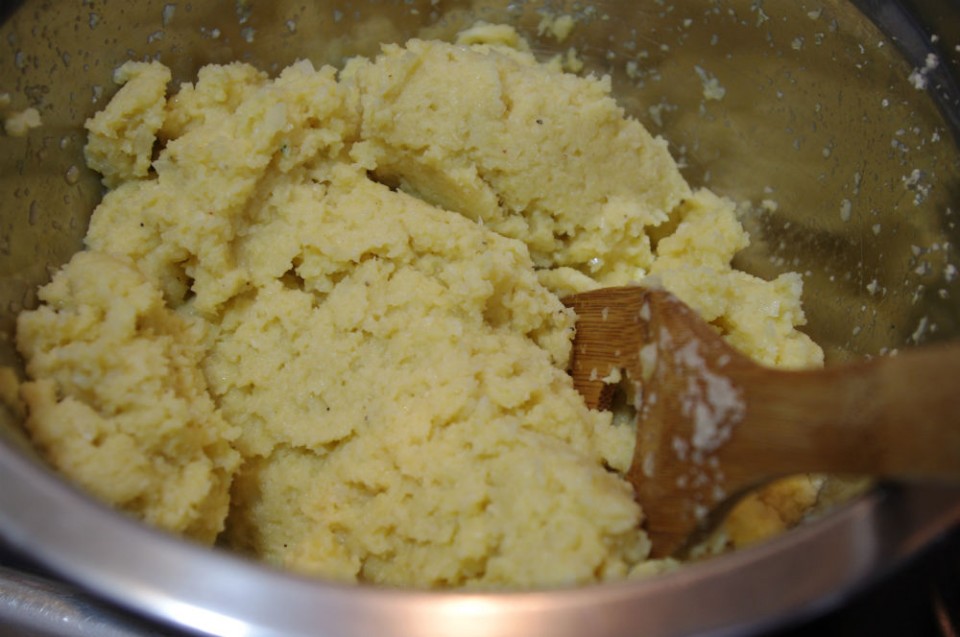 Line a baking sheet with parchment and spoon about half of the mixture onto the paper. Carefully use your fingers and whole hand to slowly flatten and spread the dough until it’s the thickness of a pizza dough. 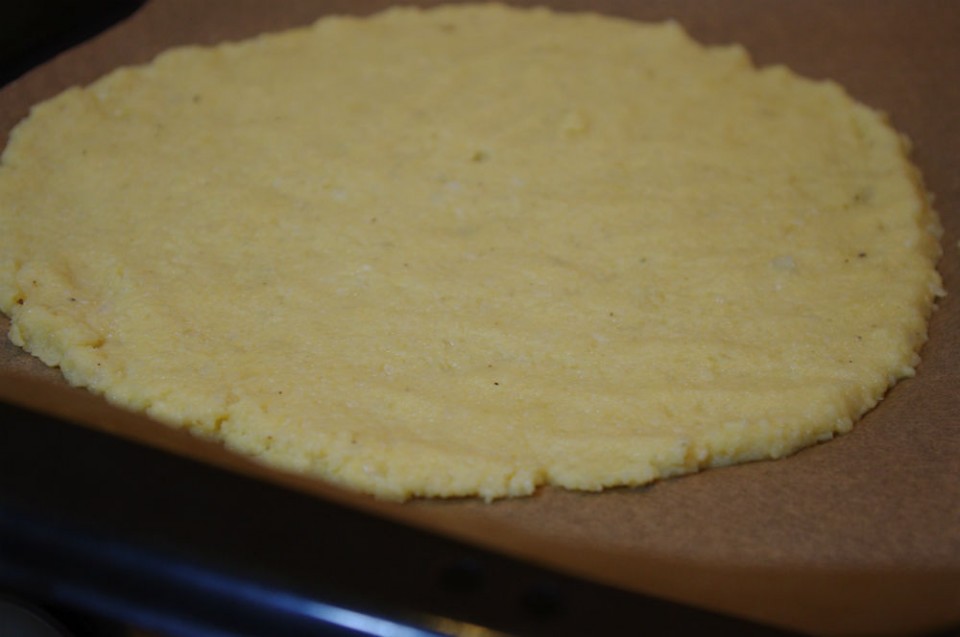 Bake at 375 for about 15 minutes or until the edges begin to brown. 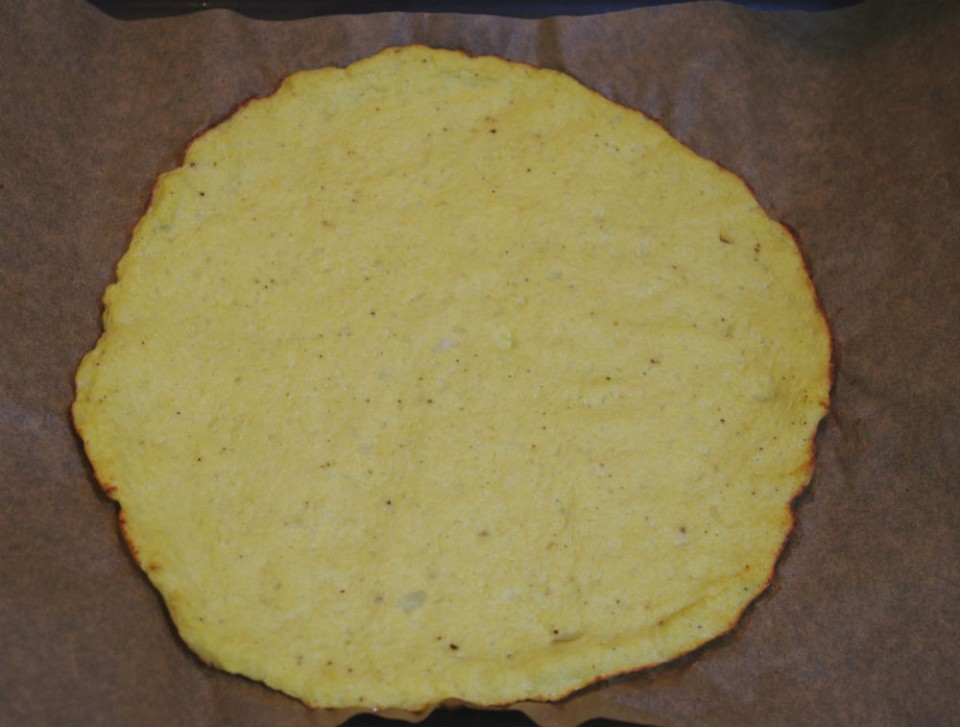 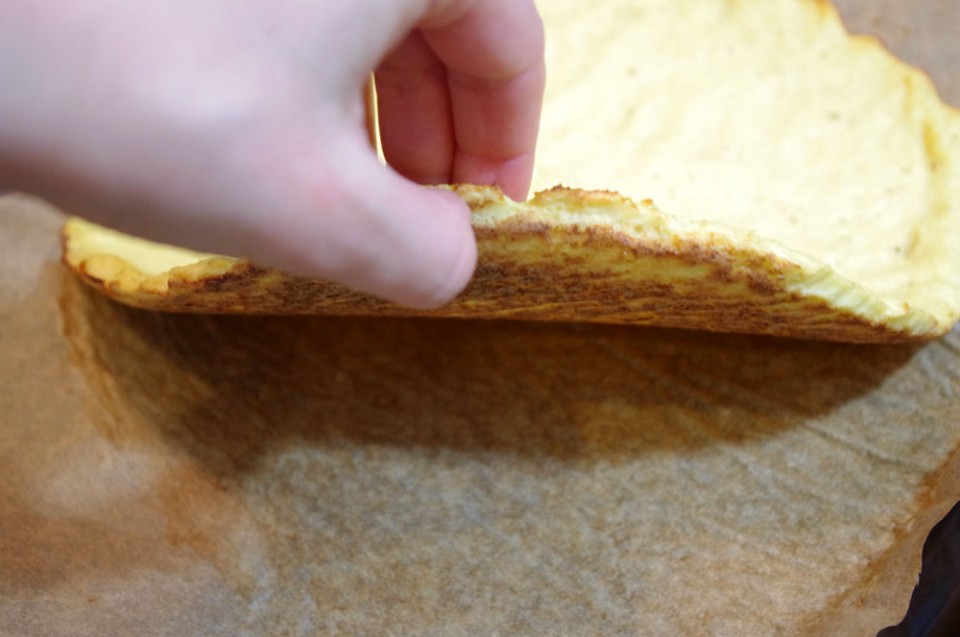 Remove from the oven and let cool, then top with sauce and veggies (I worked from the tomatoes in the middle out to the onions) and pop back in for another 10 minutes. 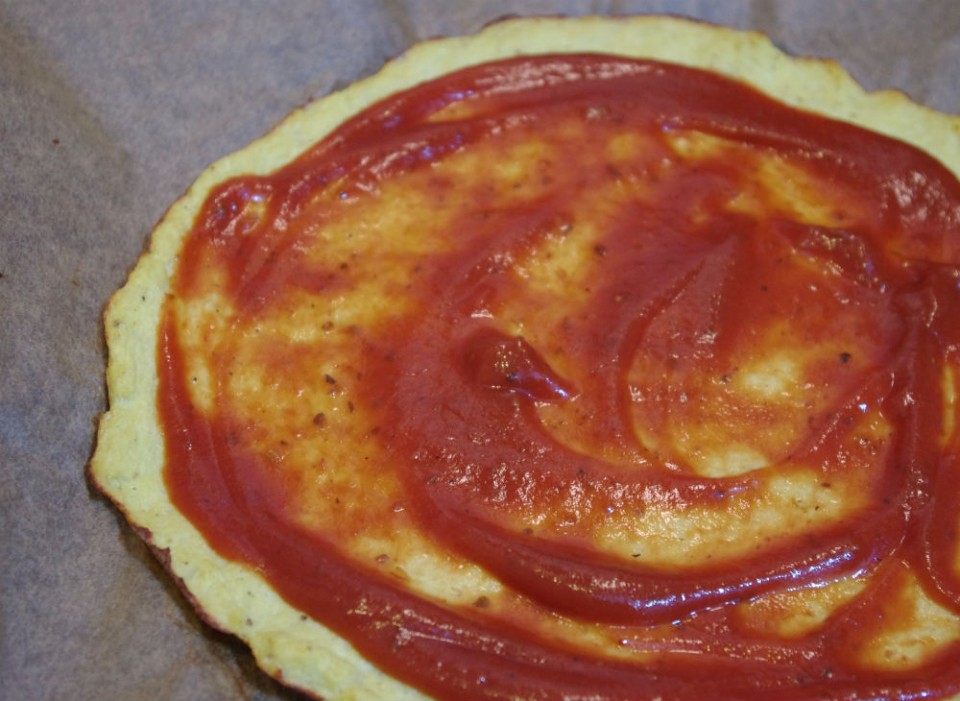 Serve with crushed red pepper and any additional toppings. 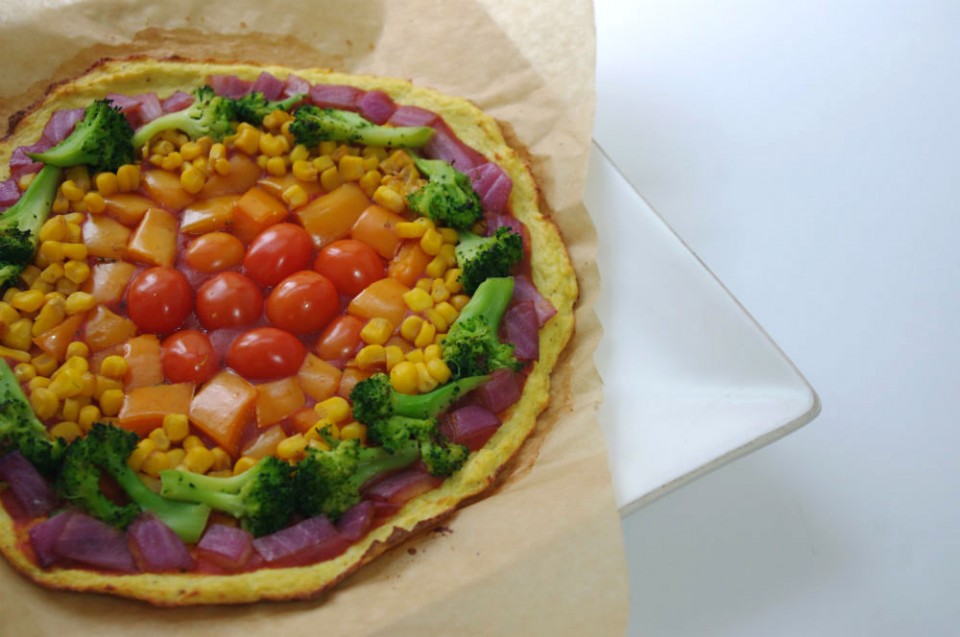 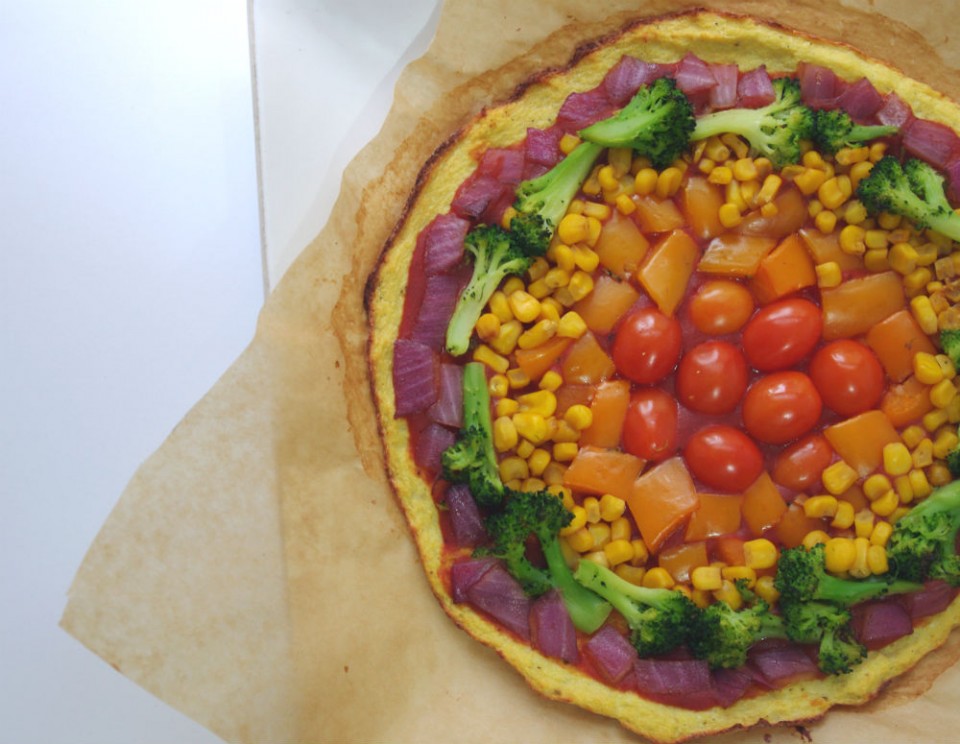 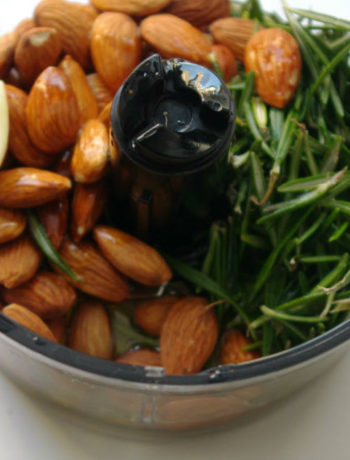 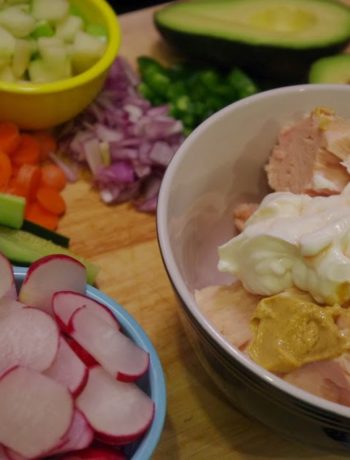 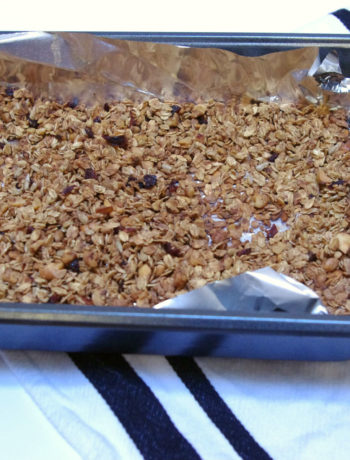